Diana being the amazing guide she is, offered us a change in the schedule for today.  She elicited our opinions on visiting another site deeper into the rainforest and received a unanimous HELL YEAH!!!

In a travelling style that made Jen’s day (more than the Tuktuks I think), we climbed onto the back of a pick up for the drive there.  Fortunately for us, well, mainly our bottoms, there had been some logging taking place since Diana’s last visit and the road had been given a more solid surface than the mud we were expecting.  It was still a buzz though.

We were driven there by Roxy Ortiz, she owns the Tikal Inn where were staying and is an archaeologist who has over 30 years of experience trekking through the Maya world.  She knows so much, and it was like having an interactive documentary that could give us information on anything we asked.  She also knows a great deal about the flora and fauna and gave us some leaves to try out to see if we could guess what they were.  The best one was the Allspice plant, because as well as tasting like the familiar spice from the kitchen cupboard, it also had a mild anaesthetic quality that numbed the mouth.  I had a bit the size of a stamp and it really affected my lower lip.  I didn’t realise until that evening that Wendy ate a whole leaf to soothe her sore throat!  It worked a treat she said.

Uaxactún was deserted for the entire time we were there, so the experience was a very private one.  I videod most of her talks and so have only a few photos, but you can see what this site is most well-known for – it’s E Group.  This was the name given to a series of constructions that later gained fame when it was discovered their placement had astronomical importance.  I mean that literally by the way, from the Temple of Masks the three grouped buildings align with the sunrise at the Summer solstice, Winter solstice and each of the mid-equinoxes.  Now that’s some planning!

There be bats in there 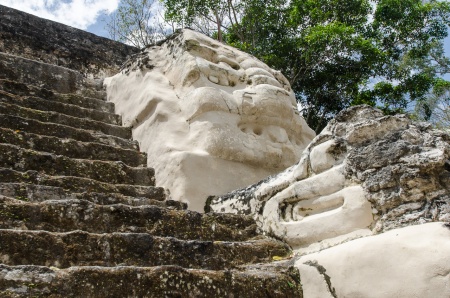 One of the stucco masks 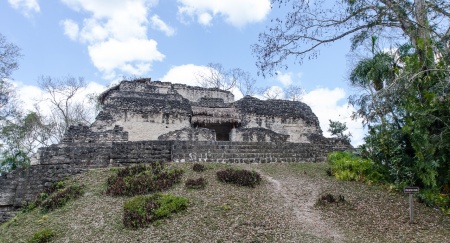 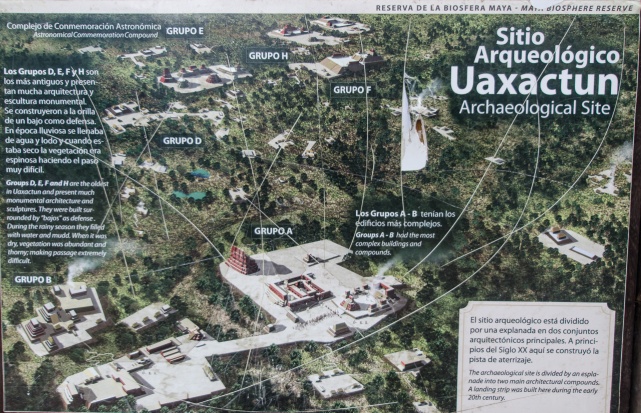 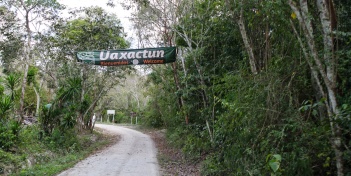 The three structures of the E-group

Roxy talking us through the meaning and depictions of a stela 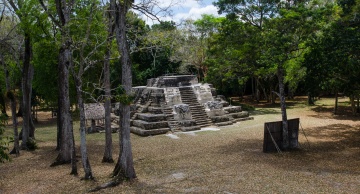 The Temple of Masks

Roxy also talked us through some of the restoration work that is being carried out there on the limestone stucco masks.  They are using more traditional methods of producing lime, quarried from the site itself to bring the original masks to life.  This tree interested us too: the hole passing through the length of the trunk is natural, and the Maya used them to transport water.  So as well as expert architects and builders they were plumbers too. 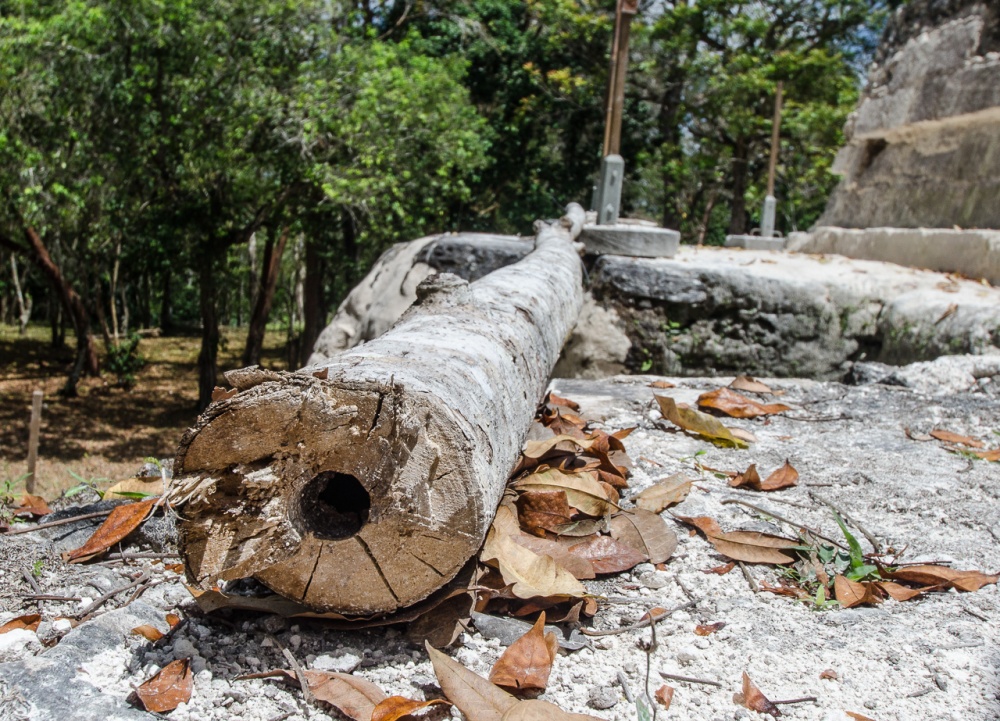 Just before leaving for Tikal, Roxy took us to the village next to the site where the locals live.  One of them was a worker on Diana’s dig at San Bartolo whom she had not seen since, she wanted to ask him to come work on her next one.  It was touching to see the reunion as he told her he thought he’d never see her again.

The journey back was a lot faster, so we hunkered down in the back and enjoyed the sights and sounds of nature as we flew through the forest.  It was calm until we went round a corner and the truck had to do an emergency stop.

Inbetween us coming and returning the wind had brought us a little challenge to overcome.

It showed us how laid back and practical the Guatemalans are, as Roxy used some rope that fixed on a seat (well, a plank of wood) on the back of the truck to attempt to use the truck to pull the trunk out of the way.

Another truck turned up just behind us, and along with its driver we all got on the other side and used all our strength to push it whilst the truck reversed.  The tree was intact, and to the right of the trunk in the shot above, its branches and canopy was interlocked with the trees and vegetation.  That made for some extra resistance and scary snapping sounds.

No photos of this as I asked Jenny to video it – ask me if you want to see it!